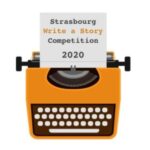 The door of the crowded tavern flew open and a man of about forty stepped in. No one looked up. He was squat with a bullet head. Around his neck dangled an old accordion. He moved quickly between the tables, sizing up the men and women with avid eyes, then, setting his stubby fingers on the buttons of the instrument, he blared out a melody.

The people continued eating and drinking. On the walls of the tavern hung pictures of angels and devils. One was of a martyr lying on a grill like a sausage, three devils prodding him with their forks. Another picture showed cherubs riding goats down a country road. Tentacles of ivy wove their way around the pictures, converging on a crossbeam that separated the main floor from a niche where there was a single table. A young couple sat there, leaning against each other.

Grinning, the man began playing a popular tune. A waitress came out of the kitchen carrying two plates of steaming food and shot him an annoyed look, but he kept on playing.

“I told you not to come back,” she hissed.